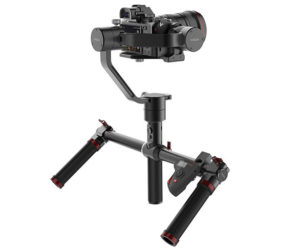 Those no doubting that one of the biggest trends in shooting real estate video in recent years is the use of handheld gimbals.  With the advances in electronic gimbal stabilisation and mass market economies of scale ie. the price coming down, handheld gimbals are more affordable and higher spec-ed than ever before. Interesting fact, did you know that one of the first commercially available gimbals, the Movi M10 was only introduced 5 years ago in 2013!  I am referring to electronic handheld gimbals and not the large (read expensive) gimbals such as the Steadicams that have been used in movies for longer than that. Funny how we think that tools such as gimbals and drones have been around for ages! I recently did my first gimbal only real estate video shoot (apart from a couple of drone shots) of a property here in Queenstown, New Zealand.

Here is the video;

What gear did I use?

All of the gimbal shots were done with my Moza Air gimbal using my Panasonic GH5 with the 8-18mm lens.  I also didn’t shoot it in V-log but went with a slightly modified Cine-D picture profile.  There was also a couple of shots using the 12-35mm lens also. Link to the gimbal on my Kit page https://kit.com/GrantJ/real-estate-video-gear/moza-air-3-axis-hand I will be posting a proper review of the gimbal up on my Youtube channel very soon.

It made me sweat!

I have mixed feelings about the gimbal style of video shooting.  I have traditionally used the slider as my main form of movement for the interior shots for video and still like the look and control it can give you.  I find the gimbal sets a different pace or feel to the video and adds a little pace or speed to your shots.  With that said I really like the third shot in coming through the gate (in the above video) and into the courtyard and the gimbal I find is great for showing movement from one space to the next. It also obviously allows you a greater range of movement rather than being restricted to the length of your slider. Ergonomically I not sure whether it was due to it being a hot day or not but I seemed to sweat a lot more than my average shoot using my traditional tripod and slider. In terms of time it took me to do the shoot I was at the property for approximately 2 hours all up and for the interior portion of the shoot I would say it took me at least as long with the gimbal as it would have with using the tripod/slider option. This may be due to the fact that I’m very used to shooting with the slider and have used the gimbal a lot less for shooting real estate video.

Example video of using the tripod/slider option only

Things I liked about shooting with the Handheld Gimbal

Things I am not particularly fussed about when using the gimbal

Best Accessory for your Handheld Gimbal 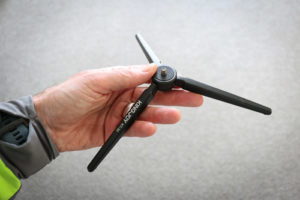 I bought this small table top tripod which screws into the base of the handle and this enables you to put the gimbal down when not using it and also stand it up when balancing your camera on the gimbal. Some gimbals come with a tripod as part of the kit but surprisingly a lot do not.  I can’t recommend this accessory enough.

The gimbal is now definitely part of my video tool kit but to me it is not a complete substitute for my tripod and slider.  I mistakenly thought that I could just roll in and replicate all my slider shots with the gimbal. Plus I thought I could do it in half the time of shooting with my slider. I do love having the ability now to show large transition or moving shots only limited by where I can walk with the gimbal and the capability to add pace to the videos style if thats what I’m after. Be warned as I definitely found there is quite a learning curve to using the gimbal in terms of getting smooth movements and what style of shots work best. Like anything thou there is no one shoe that fits all and for me the perfect solution for future videos is to combine both the gimbal and the slider to give visual variety to my productions.  Its also obviously depends upon the style of video you are shooting and your budget. For example my wife works for a property management company and I recommended using the DJI Osmo for all their rental property promotions and property condition reports.  It does a great job in a quick and efficient manner whilst adding stability and polish to their videos. Those are my thoughts, leave a comment below as I would love to know what others out there (you) think of gimbal shooting in real estate.

Have you watched my 10 Top Tips for Shooting Real Estate Video?